So, this has happened a few times in my life, each time reaffirming the first time I found my purpose, which is the story I share today. The first time was laying in a hospital bed in the Wounded Warrior Regiment at Naval Medical Center Balboa in San Diego in 2011.

Imagine a young Marine, recently stationed in Okinawa, Japan, and driven to achieve a long-term military career. I was weeks away from proposing to the love of my life and BAM!!!!

I experience my first blackout, go to the hospital, and was sent home clear. The next day I woke up with blinding pain.

For months I battle a mix of migraines, seizures, blackouts, and more doctors than I could count. These came and went over two years. It would disappear for a few months and I got to be a real marine and do what I signed up for and got to explore Iwo Jima, Thailand, and was a part of the 2011 Earthquake/Tsunami relief on mainland Japan.

During this Lindy and I got married, all while still being geographically apart. And we didn’t have FaceTime yet, it was a commitment to connecting across the world. But that’s a story for a different time.

Then after a couple of months of the medical craziness coming back again, I ended up in the hospital having lost seven years of my memory. My doctors drew a line and said it was time for me to be medically evacuated to the states for better care.

Back to the Wounded Warrior Regiment at Balboa

As I went through this medical journey, I struggled with understanding why it was happening and I became very depressed and stressed constantly.  One day, laying in bed, I was talking to a Marine next to me, and he ended up telling me about his combat injuries. Which for him was the day he was blown up by an IED. When we met he was going through multiple surgeries for his arm and leg that had been removed. The crazy part was at this point he told me things he hadn’t told his family and barely his doctors. At one point he said, “why am I telling you this?”

With Nothing Else to Do, We Broke it Down

He trusted me because I was in the hospital with him. We shared the Marine Corps bond. But there was more. Both personally and professionally I had been trained to talk to people, build trust, and hear their stories.

I should mention, my job in the Marine Corps was as a Photo Journalist, and I guess I was decent at it. At that point, I had been published in 10+ countries and won awards for storytelling. I was also the kid whose mom said “stranger danger isn’t a thing with Matt because strangers are just friends he hasn’t met yet.”

Back to the Hospital

It was at this moment that I realized why everything that happened to me, both good and bad, was so that I could help others find their voice and share their story.  At 1:37 pm on Tuesday, December 4th, 2011, all of my pain was gone. It took many years to truly heal but at that moment, my stress, and my pain had been resolved.  I knew my purpose. I knew why.  Over the years that faded a little with life and supporting a family. But then in 2019, I was allowed to reignite that spark.

And it grew from a spark to a wildfire. Especially on the second day of COVID lockdown when Naval Assistant Secretary (RDA) Jim “Hondo” Geurts looks at me and says “it’s time for that Mohawk to fly.”

And soar I did. Over the next 3 years, up until now, I have made 1300+ videos, podcasts, and live streams connecting people. Either through lessons of my own or by highlighting their story.

I recently had some more health battles that took me down for a few months.  Today I realized it wasn’t the medicine that took my spirit, it was not being able to amplify others’ voices.  The medical took my physical strength but the toxic work environment I was around strained my mental clarity.  And I couldn’t get it back because I wasn’t staying true to my purpose. Which fuels me to push on.

But I was reminded recently of my true purpose of bringing joy into the lives of others. Specifically helping people find and amplify their voices and story.  So that’s what I am on a journey to do. I have multiple projects on a variety of media platforms that steer me closer to my dream of amplifying your voice. No matter the medium.

So Let’s Find Your Voice Together

Send me a message, join my podcast, and submit to our blog. Or make a video for the 100 days of the awesome challenge.  Wherever you are in life, be your best self and live your life to your true purpose. If you don’t know what that is, let’s talk. I know some folks who are amazing at helping you realize it and even build a life around it.

Be the Reason Someone has an Awesome Day 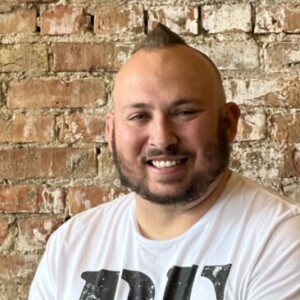 I am a change champion and industry disrupter on a mission to connect businesses with people and solutions to put them in a position to thrive. I have built an outstanding reputation within the United States Department of Defense as a go-to resource for igniting conversations between many of our government’s most influential leaders and proprietors of the world’s top technical solutions.I am also a passionate organizational design expert. I have consulted for dozens of businesses and government agencies on organizational structure, talent development, and long-term visioning. I am at my best when inspiring high-potential minds with the context and direction they need to grow. I have been applying human-centered practices to product development, branding, marketing, training, team building, and digital & organizational transformation since 2008.I face the world like the game Battleship, while many people see it like Risk. I see my goals, act upon them, and adjust fire as needed. By the time most have started, I have "failed" and adjusted ten times. This is the approach by which I live my life and it has been incredibly successful for me thus far!