Military Transition Story – love and gratitude. That’s how I ended my time as a Marine.  As I said at my ceremony, where nearly 100 of my closest friends, family, and colleagues joined in celebrating with me, that’s not what I was filled with 24 years ago. However, it took a lot of very patient leaders to spend an immeasurable amount of emotional capital for me to take off the uniform filled with love and gratitude.  Sometimes at great professional and personal risk. I have so many thanks still to give, so many hugs left to hug, so many high fives to five.  But in the meantime…

It’s hard to wrap up almost a quarter century of feelings in one article. Or one retirement ceremony for that matter. And that’s the purpose of this article, to share a few things that have helped me in the last half or so of my career.  Nothing prophetic, nothing original, just reminders:

When it came to innovating or trying to affect change, the Marine Corps as an institution was actually my enemy more than it was my ally. It was just one more obstacle among a thousand others that I had to mitigate to accomplish what I knew was right for the Marines. As a non-commissioned officer, I used to tell myself “you never expected to be even a corporal, every rank you hold from now on is gravy.” Thinking about it, back then I was just being appreciative, but really it was way more than that. I had conditioned myself to treat my rank as expendable. Not a great career plan, but that mindset enabled me to take way more (calculated) risks than others because I wasn’t acting on behalf of my career, I always acted on behalf of my Marines.

Not every Patriot Wears a Uniform

If the U.S. hopes to truly leverage commercial innovation for DoD applications, the DoD needs to stop acting like everyone outside the government cares only about their bottom line. True that corporations exist to profit. That’s the beauty of our capitalist system. A free market just happens to be our competitive advantage on the global stage.  But I challenge the assumption that everyone in the industry is out to fleece the government. In fact, the difference between my experience and others in the research and development and acquisition communities is that I was enabled with the freedom of movement to communicate effectively with our industry partners.

Actually talking to other humans, absent the filters of contract negotiations and legal reviews, showed me that most of the industry is just as interested in America’s success as are its service members, senior executives, and civil servants.  The DoD must leverage existing policy to get to “yes” and not hide behind it to lead with “no.”  Our industry partners want to make money.  They also want to enhance the survivability and lethality of our service members while deployed and help them train more efficiently and effectively when in garrison.

I can confidently say that without exemplary Staff NCO leadership, I could boast no success in the Marine Corps.  That’s not false humility, that’s a fact. Certainly, I would have not earned a bachelor’s degree. I would not have earned that degree at the exact right time to request a commission. Initially, I did not have the confidence to request a commission on my own. My Staff NCOs saw something in me that I didn’t see in myself.

And it wasn’t only as an enlisted Marine that I enjoyed the mentorship and leadership. As I progressed through the officer ranks, there was a Staff NCO at every step to guide me, advise me, and save me from myself in many cases.  I have to give as much credit to the Staff NCOs who raised me as I do those that sustained me. A good Staff NCO can be the difference between life and death, an excellent Staff NCO can change your life from now until death. I’m grateful to say that I’ve been blessed to learn from and lead with so many great Staff NCOs.

I’ve taken off the uniform for the final time and I am filled with love and gratitude. For the time I spent with thousands of those beautiful creatures we call Marines. What I’ve learned from our industry partners. The mentorship from my Staff NCOs. That it ended surrounded by family, friends, and colleagues representing every important period of my life. So filled with love and gratitude for my military transition story. 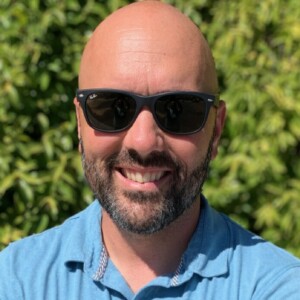 Leader of high-performing, multi-functional technical teams, facilitator of human-centered design and agile methodology, connector, collaborator, researcher, father of four girls, husband to the most dedicated woman I know, paddle boarder, hiker of trails, and general outdoors lover. I find a great deal of satisfaction using human centered design to draw out the creativity from frustrated people toward sourcing and solving complex problems. And then driving the execution of technical projects critical to strategic success.